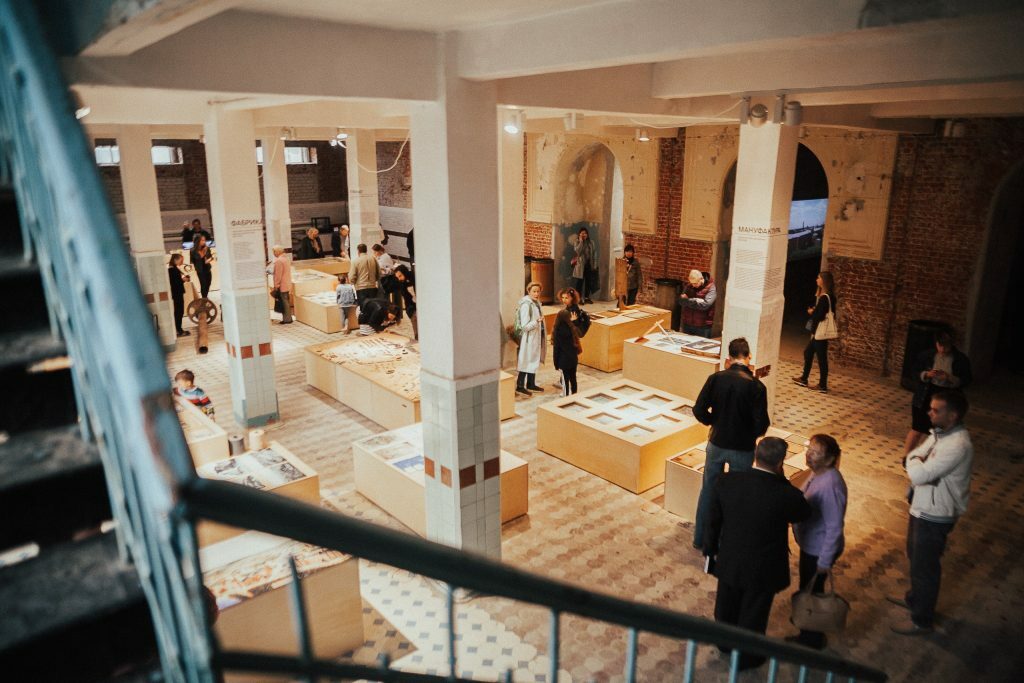 Read the story of its creation, recited by founders Yulia Krivtsova and Sergey Kremnev.

«Museum Factory» is an art space, which had been opened in Yaroslavl, Russia in July, 2019 in the operative field of «Krasnyy Perekop» Technical Textile Factory. Company’s history is more than extensive, it is the successor of the Yaroslavl Big Manufactory, city’s oldest factory, founded in July, 1722 by decree of Peter the Great.

«Museum Factory» is dedicated not only to plant history, but to the whole microdistrict, and exhibition platform is designed to become a dialogue space for all generations and a point of reconciliation of different views on difficult moments of history.

New museum features an exposition, presented in the former Hall of Steam Engines, which tells the story of old enterprise through objects, documents, photos, voices and stories of local factory residents.

Twice a month Krasnyy Perekop helds an excursion «Man Honors a Place», besides the constant museum exposition. Multimedia excursions are also available — they can be combined with ordinary visit to the museum, or reviewed separately. Format of the excursion is interactive, visitors walk in headphones and listens to audio spectacle.

Opening in July have a high demand, although so far we have not announced the event widely, considering it «on the operating level». It has been implemented in the framework of the «Changing Museum in a Changing World» program by Vladimir Potanin Charitable Foundation. New stages of work, addition and completion of the exhibition are ahead, and even the most important task — to make sure that the Museum was not stayed behind the walling and is available to general visitors.

For us, the very fact of opening a Museum exhibition at the existing enterprise has become a challenge. It was very difficult to make the abandoned industrial space public, attractive; to preserve the historical layers, highlight the heritage in a situation of limited resources.

We replaced the doors, made the stairs, conducted electrical engineering at our own expense; have done a lot of work of clearing the room, removing unnecessary partitions, ventilation shafts.

Opening and invitation of people has become an important aspect for the management of the plant to believe that the idea of the Museum is a reality, not just a project. Opening of the show was attended by interested visitors, as well as people who work at the factory and those who are already retired, but have worked at the enterprise for more than 40 years. There was even an old resident of the district, who is 92 years old! This forced everyone to admit, that the Museum is not a myth, but a reality!

When Peter A. Shelkoshwein, Director of the Factory, saw by himself the shine in the eyes of visitors, their keen interest in the history of the enterprise, he significantly changed his attitude to the Museum. And immediately offered to hold the next task meeting right within these walls, where I conducted a tour for the operative foremen.

Initially skeptical-minded («but who needs your Museum?»), they joined the discussion about Museum. I saw how the mood of people changed, I was happy when they promised to bring interesting stuff and ancient objects; wanted to support us. A week after the opening the group of children from Yaroslavl city camp came to visit the Museum, and again we got grateful reviews, thanks to no less tangible children’s interest.

In July, 2019 the exposition had been visited by Natalia Khalezova and Olga Kiryanova from the Karzinkin’s dynasty — the pre-revolutionary owners of Yaroslavl Big Manufactory. They donate to Museum the copies of Nikolai Karzinkin’s documents. In 1917 Nikolai prepared to accept the affairs of the manufactory, but instead become the eye witness of the nationalization of the enterprise, and then exiled to Uzbekistan. And, in spite of everything, he continued to serve the cause of his life — weaving production. Today descendants of Karzinkins continue to cooperate with the museum.

Another gift was received from Yan Levin, Yaroslavl ethnographer, entrepreneur and collector. Museum exposition was supplemented with a unique «Factory Album» of Y1926, which contains rare photos and data about the factory at that time.

Currently we are working together with the Embassy of Netherlands — after opening of the exhibition we were offered to do a joint project dedicated to preservation of the cultural industrial heritage. Because in the past, Yaroslavl Big Manufactory supplied textiles for sails to Holland. This will be our second joint project during the work of the «Museum Factory».

The Museum exposition works on sessions, as well as «Radio Factory» multimedia play. Over the period of July, together with the spectacle attendants, it has already been visited by more than 500 people.

The idea to open a new Museum exhibition at the enterprise appeared in 2016 by the Director of the plant, and we supported it, so, this project is the result of our joint efforts. Perhaps we will be joined by the third party, another public organization, which is now engaged in the development of a Museum, dedicated to the heroes of labor. Their theme and attitude to work unites us, and we would like to unify resources and audience.

The theme of the Museum has been also raised during Social Impact Days event, which took place in Yaroslavl in December, 2018. It was important for us to work with experts on the issues of sustainability and independence of such a site in the city.

How much did the meetings and communication on Social Impact Days helped you to take a fresh look at Textil’s work? Have you develop a different attitude to Textil after the opening of the museum?

Questions that were raised as part of the SID helped to «separate» my person from the Textil project, made possible to look at it a little differently and think about how we can really apply the knowledge and experience, gained during the event.

It allowed us to look at the know-how as a technology, to see opportunities to transfer knowledge, experience and even sell them.

A couple of months later, Julia and I were invited to be the mentors of «100 City Leaders» program, which is supervised by Agency for Strategic Initiatives. It gave us the opportunity to work as experts with people from Lipetsk, Tomsk and Porechie-Rybnoe.

Together with the «Museum Factory» we opened another door to Krasnyy Perekop, and gave people even more reasons to be interested in history; to love their city. Besides, focus of attention shifted to the Museum, and allowed us to delegate work on «Textil» to other team members.

At some point, during last years the idea of museumification of the existing enterprise began to seem like an utopia to us, so the very fact of opening the exhibition, work sessions, excursions became the fulfillment of a great professional dream, after which I literally had new lease of life!

It is a strong feeling — we have gained the trust not only of owner of the factory, but also of people, living and working here. It was important for us that through our «rose-tinted glasses» we gave people the opportunity to see «Museum Factory», to visit the play, to draw attention to Krasnyy Perekop of professionals from Russia and other countries. All this gives confidence in their own abilities, a vision of where to go next.